The Mekotekan Rituals are part of the traditional Kuningan Festival that is celebrated to battle evil spirits that are said to attack Munggu Village.

The Kuningan Festival is held every six months according to the traditional Balinese calendar. The festival’s rituals are diverse but aim at purifying the locals and the village. By eliminating any evil spirits, the locals are able to ensure that only good spirits remain.

The ritual involves men reenacting the Blambangan war by walking to temple carrying wooden sticks. They are sprinkled with holy water and proceed to lay the sticks into a huge pyramid. Some men will climb the pyramid to “face off” with each other whilst cheered on by the large crowd.

The rituals commence at TBA and last throughout the afternoon. This ritual is believed to date back to the 17th century around the time of the Mengwi Kingdom. Legend has it that the Mekotekan ritual was conducted to welcome the kingdom’s soldiers back from the battlefield after fighting against soldiers from East Java’s Blambangan kingdom. On their way to the centre of the Mengwi kingdom, which was Munggu village, local residents cheered them as the winners of the war.

This ritual was banned for a time during Dutch rule of Indonesia, around 1915, but the village resurrected this important cultural event and it remains today.

Visitors are welcome to watch the ritual, though should not participate as it is considered disrespectful to the Balinese people. 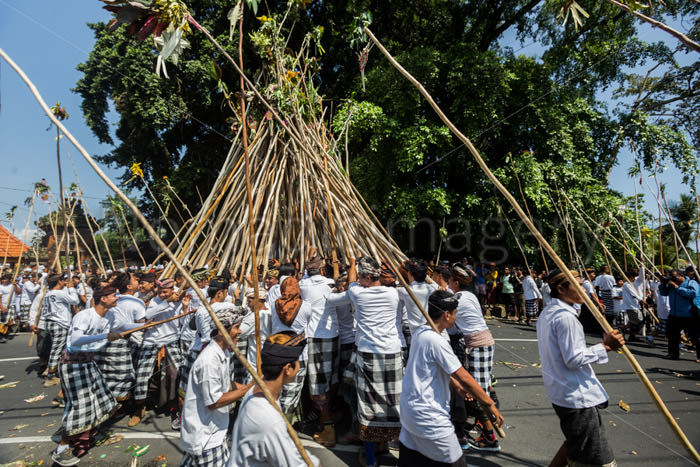