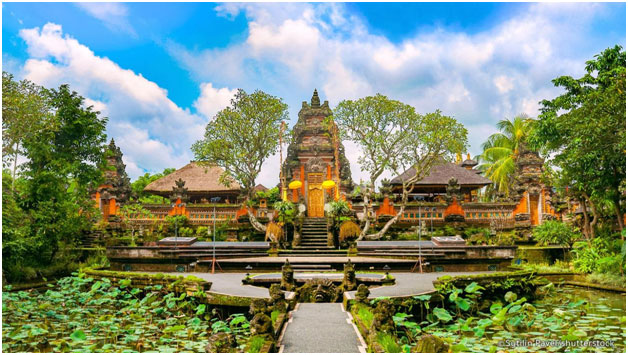 This set a trend for other foreign artists and soon the likes of Rudolf Bonnet and Willem Hofker arrived to set up easel and paint. As word of Ubud and its enchanting beauty spread, the village went on to host a circle of famous faces such as Noel Coward, Charlie Chaplain, H.G Wells and the recognized anthropologist Margaret Mead.

The vision to establish apainter’s association was born in 1936 and saw a collaboration to form the Pita Maha between TjokordeGede Agung, Spies, Bonnet and several local artists. With the help of the American composer Colin McPhee, who had built a home along the stunning Sayan Ridge, the group was responsible for bringing together some of Bali’s greatest artists to teach painting, dance and music to a younger generation. Ubud developed the reputation as being the cultural pulse of Bali and that image still stands today.

World War II brought hardship to the island and Ubud suffered considerably. The Japanese invaded and this was later followed by a violent struggle against the Dutch for independence. Indonesian gained its freedom and its first president in 1945, but some 20 years later a so called ‘communist coup’ saw thousands of murders across the archipelago. Many lives were stolen, especially in Ubud and it is local folk lore that the white egrets inhabiting the area of Petulu are actually the lost souls of those who were massacred.

After almost 20 years of uncertainly, tourism resumed in Ubud during the 1970’s when backpackers and hippies set out to seek new experiences. A steady flow of visitors have since found themselves captivated by the intense beauty of the landscape and gracious hospitality of its people. Ubud has managed to embrace the 21st century with dignity and still retain its timeless artistry, culture and religion. It is a unique destination blessed with a strong sense of community and rare spiritual energy.